skip to main | skip to sidebar

Wow.
I had twelve years to prepare this post and I fucked up having it ready for the last skull post. Ha.
So. 666 skulls painted but not all skulls that were sponsored got painted unfortunately. I'm really sorry for that. I should have painted the skull on the cover of Sepultura's Beneath the remains. I made two attempts. First attempt ended up with me shoving the brush straight through the canvas in anger when I fucked up so bad that there was no chance I could've saved it. Second attempt just had me giving up about halfway done. After that never I could muster up the energy or will power to take it on a third time. That was my worst set, and really only setback I feel I had.
Well with that out of the way let's talk about why I started this whole crap and what will or will not happen now.
First off.
I had this stupid idea while battling a massive hangover. At first I just shrugged it of as stupid and sheer idiocy. But I couldn't really get rid of the idea and it kind of started to mock me.
What's important to know is that where I was mentally at the time was not in a good place. I was unemployed and I had been for quite a while. I was starting to doubt myself and it felt like I was floating through empty space like an lost astronaut on a space walk.
I had nothing to grab onto and I was just waiting for the air to run out.
And this is where a huge project like this comes in. I felt that since I really had nothing to grab onto in my life, a project like this would be an easy way to get a point to aim for at the horizon. This shit would take up to a little more than 12years.
That.
That was exactly what I needed to get myself together and start working towards.
The sponsors would be a way for me to put pressure on my self to not fail.
I have failed myself lots and lots of times.
But I felt that I wouldn't fail others.
No way.
Every sponsor was a rock that paved the way under my feet towards my goal.
A goal that in it's core just was to survive.
And fuck did I accomplish that.
And for that I am truly grateful to each and everyone who has contributed.
People that has sponsored of course. But also everyone who has cheered me along the way.
Well, What happens now?
Will there be an exhibition?
I have no idea. The way I feel about it now: no.
right now I feel that I'd  really just want to burn them all in a huge bonfire to celebrate how this project is, just like life itself, just a vanity of vanities.
But until I can decide on what to do they will all be packed down in moving boxes. A crap load of moving boxes.
Anyway. Here's a collage of all the skulls I painted. 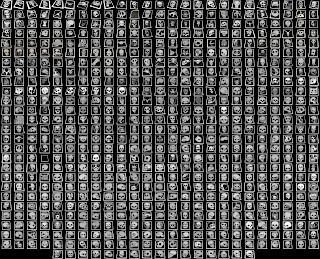 I will get back in a day or two with a small update and also sometime soon to talk more about the skulls more specifically.
If you have any questions please email me on pierre.backman @ gmail [dot] com
Thank you for reading.
Pierre Bäckman
Upplagd av Slusk kl. 20:01 Inga kommentarer:

The day is here. I finally get to write the letters DCLXVI in the right order. I've thought about what to write in this post for almost twelve years now. But sitting here I can't really make out the words. If this text is still in the post I will make sure to come back later this week and do an update with a proper text. The last skull is a generic one. I was thinking of doing something special but I found it better to be a skull just like any other. Well, it is a total original creation at least. 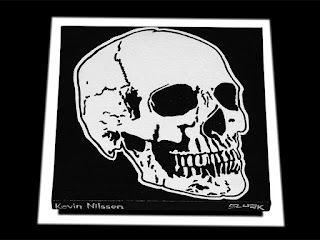 This skull sponsored by Kevins Nilsson. 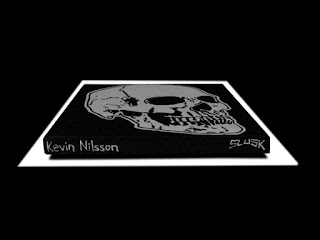 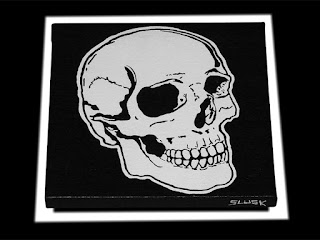 Another skull. One of the very last ones. Two skulls more before I'm done with this. 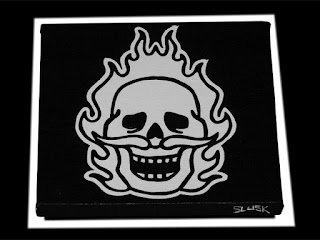 Another skull to add. 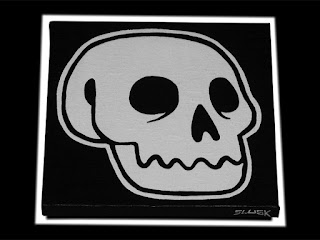 Not a lot a skulls left now. Starting to feel a bit awkward. 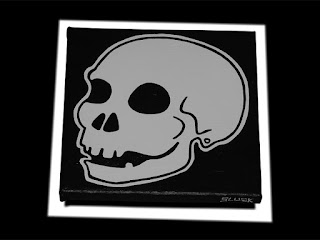 Adding another skull to the collection. 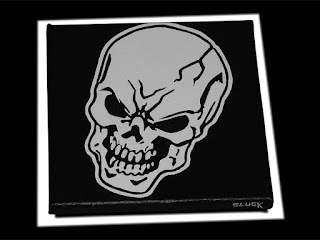 Best of the best.